Whales in a changing environment 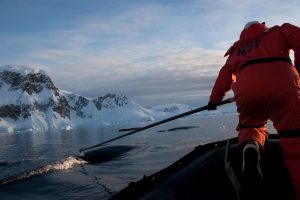 The Palmer Long Term Ecological Research (PAL) program seeks to obtain a comprehensive understanding of the Antarctic seasonal sea-ice-influenced ecosystem ― the climate, plants, microbes, animals, biogeochemical processes, ocean, and sea ice south of the Antarctic Polar Front (northernmost extent of ice-influenced water). Our research focus is to understand the foraging behavior and ecological role of humpback whales and minke whales in the LTER study region in response to climate-driven changes. Since PAL’s inception in 1990, its central hypothesis has been that the seasonal and interannual variability of sea ice affects all levels of the Antarctic marine ecosystem, from the timing and magnitude of primary production to the breeding success and survival of penguins and whales. Our site on the western side of the Antarctic Peninsula (WAP) addresses multiple spatial and temporal scales, including hemispheric, decadal, and climate-relevant scales; regional, local, and daily scales; and seasonal and process-relevant scales.

Our conceptual framework addresses the interactions between space–time variability over a range of process-oriented scales driving ecosystem dynamics at our site. The first and most fundamental premise is that all the key populations of animals and plants in the ecosystem require sea ice, whether directly or indirectly, for successful completion of their life cycles. This postulate includes phytoplankton; krill and other macrozooplankton; penguins and other seabirds; and marine mammals. Even groups such as bacteria, whose populations and life history characteristics are poorly known, show fidelity to sea ice variability. Another key premise is that physical and ecological processes 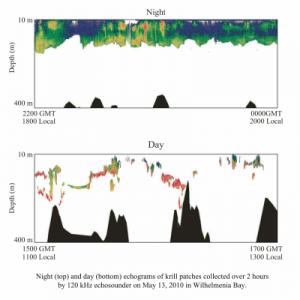 are expressed over characteristic space–time scales, to which we must match our observations if we are to correctly interpret their interplay. Interannual variations in sea ice duration and extent in the WAP region respond to global-scale climate forcing through changes in regional winds. Variability in the Southern Annular Mode (SAM) and ENSO results in periods of high and low ice years (depending on the phase of each). High primary productivity, krill recruitment, and penguin breeding success follow high ice years, whereas recruitment is poor or nonexistent in low ice years. In the WAP region, a trend toward more positive SAM is driving changes in prevailing winds, heat inputs from the deep ocean, and warming air and sea temperatures, which combine to diminish annual sea ice extent and duration. These changes appear to be proceeding north to south along the WAP, a process we term climate migration. With the virtual loss of sea ice from the northern region in our study area, the ice-dependent ecosystem may have reached a tipping point with loss of ice-dependent populations and may now be transitioning toward a new, ice-tolerant or ice-independent ecosystem. 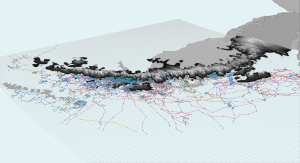 Over the next six years, we will conduct visual surveys, collect biopsy samples, and deploy a variety of tags on cetaceans in the LTER study area.  Visual survey data will be used to test how the distribution and density of whales change in relation to large-scale interannual variations in this environment. Skin and blubber biopsy samples will be collected to conduct population-level analysis to better understand the proportions of different breeding stocks present in the population of whales that feed in the LTER study region. These samples will also help us understand the demographics of this population by determining sex ratios, pregnancy rates, and diet composition. How these change over time will provide vital information on how these whales are responding to both climate change and the cessation of commercial whaling. Long-term satellite-linked tags will be deployed to determine habitat use and behavior over broad-spatial and temporal scales, while multi-sensor suction-cup tags will be deployed to study the foraging behavior of these whales in relation to the abundance of their main prey (Antarctic krill) and other krill predators (e.g. Adelie penguins). Understanding the ecological relationships between whales, their prey, and other krill predators will allow us to test hypotheses regarding how competitive interactions among sympatric predators may manifest with changing environmental conditions.